One of Africa's largest and oldest National Parks

Kafue National Park is Zambia's largest and oldest National Park. Established in the 1950s by safari legend Norman Carr, the Park covers an area of over 22,000 square kilometers, making it also one of the largest Parks in the entire African continent. 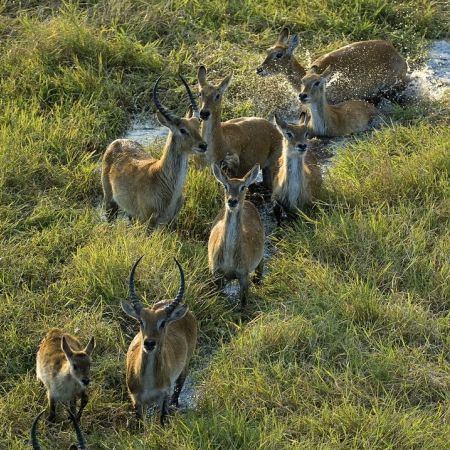 © Dana AllenDespite its size, however, and proximity to Livingstone and the Victoria Falls (only a 2 hour drive), the Park remains still relatively undeveloped and unexplored, with very few camps and lodges, and therefore offers visitors a true feeling of being in a safari wilderness.

Kafue is a dry season Park, as the seasonal floods make it too difficult for many camps to operate for a large portion of the year. The majority of the camps are therefore only open between May through to mid-November, but a small number are open for longer.

For game viewing, the Busanga Plains and the adjacent Busanga Swamps in the far north are regarded by most as the wildlife 'jewel in the crown'.

The Busanga Plains is a vast seasonal flood plain which is inundated with wildlife, especially towards the end of the dry season (July-November). On daily game drives, you may be lucky to encounter wild dog, buffalo, lion, leopard and cheetah as well as elephants, hippo, zebra and wildebeest. Huge numbers of red lechwe, puku, sable and roan antelope are just a few of the antelope species commonly seen in the area.

The birdlife is also prolific here, with over 450 species of bird having been recorded throughout the Park including as the endemic Chaplin's barbet. 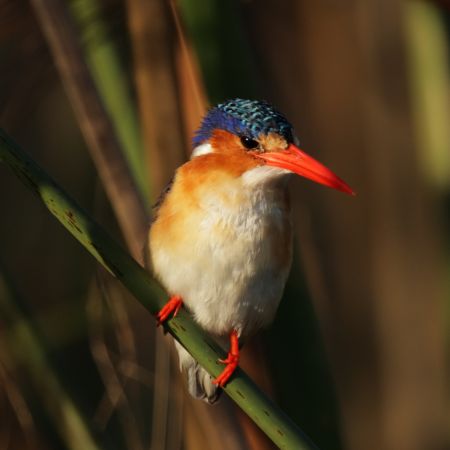 Early on in the season, the Busanga Plains are still flooded, so as well as game drives, boating safaris are also included, enabling visitors to explore the myriad of channels and enjoy a different perspective to the Park, as well as close encounters with the resident hippos, crocodiles and water birds.

Walking safaris are also an option, always in the company of a qualified walking guide and National Parks Scout - with an option to camp out in the bush and sleep under the starry skies.

However, for a truly unique view of the Busanga Plains, take to the skies in a hot air balloon safari (operating between August and October only). Float majestically over the Plains for about an hour, taking in the stunning views and marvelling at the wildlife below.  Upon landing, enjoy a sumptuous champagne breakfast in the bush.

Whilst it is fair to say that the Busanga area is the undisputed wildlife hotspot of the Park, the southern and central areas are not without their own share of game, however game viewing here can be more challenging.

The permanently flowing Kafue River, which winds is way through the Park, is a hotspot for seeing huge crocodiles, and pods of hippos. In the south of the Park, the river widens and is dotted with sand banks, tiny islands and huge granite boulders. One of the highlights of a stay in the southern area is a boat cruise on this beautiful stretch of the river, where you may even see leopards drinking at the waters edge.

Many people will fly from Lusaka into Kafue and onto their safari lodge, but there is also a well maintained tarmac road which links Lusaka and Kafue for those who prefer to keep their feet firmly on the ground.

Kafue is generally regarded as being a 'second time' safari destination, but first-timer safari goers with a real sense of safari adventure and an open mind will certainly find a few nights here incredibly rewarding.

Shumba Camp is located in the northwestern corner of the Kafue National Park, in the centre of the famous Busanga Plains. The camp comprises 6 spacious en-suite luxury safari tents on raised platforms with spectacular views of the surrounding plains.

Busanga Bush Camp lies in the heart of the Busanga Plains, a vast mosaic of expansive grassy seasonal floodplains that extends to the horizon. The camp, hidden in a well vegetated tree-island of sycomore fig trees, can accommodate just 8 guests in 4 well-appointed tents.

Nanzhila is the closest true safari destination in Zambia to the Victoria Falls and enjoys nearly 3000 sqkm of the Kafue National Park to itself. To make that bush experience feel all the more authentic, the tents and chalets are lit with paraffin lamps and hot water comes from donkey boilers.

Set in an area of pristine wilderness, KaingU Safari Lodge offers a magnificent safari experience in the heart of the African bush. The lodge's 6 double Meru-style tents all have en-suite bathrooms and are set on raised wooden decks overlooking the Kafue River.

Ila Safari Lodge is located on the banks of the mighty Kafue River in an area of abundant wildlife and boasts 180 degree views out across the water. Each tent has been individually designed to mesh with the flora surrounding it providing shade, privacy and your very own piece of Kafue wilderness.

Set to open in June 2020, Chisa Busanga Camp is a new intimate bush camp located on a beautiful island in the heart of the Busanga Plains, in the north of the Kafue National Park.