You May Have Missed The Football…But You Can Still See The Big Game!

Whilst many people will remember this year’s World Cup for the upsets and drama on the pitch, it is also fair to say that the warmth, enthusiasm, and hospitality of the hosts has won many new fans from around the world. South Africa has shown that it can organise one of the greatest sporting events on the planet, and do so with a style and passion that is all African.

Many thanks to all the hotels, guesthouse, and safari lodges that made the hundreds of fans that we had in South Africa during the tournament so welcome – everyone we have heard back from to date has said that they had a fantastic time…well the England fans were clearly a bit disappointed with the football, but they loved the country and the hospitality!

Whilst the carnival prepares to move on after this weekend’s final, and fans from around the world return home, South Africa remains a truly amazing destination for first time visitors and those who choose to return again and again.

Travel Butlers help thousands of people plan and book their trip to South Africa and the neighbouring countries each year, and all of our consultants are experts with at least 7 years experience of the region.

Because this is our speciality, we know the routes and safari lodges, beaches and top places that will make your trip the holiday of a lifetime…and because we know that everyone is different, we tailor every trip to each client’s specific requirements rather than work on a ‘one size fits all’ approach.

So if you fancy sipping cocktails on Table Mountain, eating out under the stars after a day on safari or trying any one of the thousands of other amazing experiences on offer,  then why not ask us to help you plan and book your trip to Southern Africa?

Comments Off on You May Have Missed The Football…But You Can Still See The Big Game!

For anyone planning a quick hop up to Victoria Falls during their stay in South Africa for the World Cup, Zambia have just announced that entry visas will only cost $25, as opposed to the normal $50, in a bid to encourage visitors. 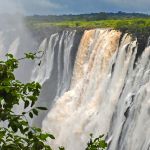 Only a short 2 hour flight from Johannesburg, a trip to Victoria Falls is certainly memorable. One of the 7 Wonders of the World, the Falls are situated between Zambia and Zimbabwe, and with a width of 1.7 km and a volume of 9 million litres per second pouring down a vertical drop of just over 100m they are certainly one of the largest waterfalls in the world.

The sheer noise of the Falls as they cascade over the edge into the deep gorge is deafening, and the misty clouds of spray, occasionally broken by rainbows, are visible from over 30 km away – hence it’s local name, Mosi-oa-Tunya, “The smoke that thunders”.

The reduced fee will apply to those entering the country with a valid ticket for any of the World Cup matches.

The reduced visa fee will only be in force until July 31.

At last ! Breaking news is that the Gautrain is FINALLY ready to rock and roll (not literally otherwise that would be a bit dangerous).

The much-awaited service between OR Tambo and Sandton wil be operational today, just in time for the World Cup … talk about running it to the wire !

But lets not complain !

Over the World Cup, it is anticipated thousands of fans will be using service, but once the World Cup is over and forgotten, this new service will be invaluable to anyone wanting to get easily and quickly from the airport into Sandton, without battling against the ever-present heavy traffic.

Comments Off on Gautrain a Go-er !

The World Cup TV Planner can let you plan your entire world cup viewing and can automatically add fixtures to your Outlook (or similar) calendar to ensure you never miss a vital game!

This FaceBook application translates the South African kick-off times for every game into different time zones, and for the UK, it even has details of which TV channel the matches will be on!

All the matches are searchable by team, group, match date, and more, and if you set your preferences-up the planner will default to your team and time zone next time you use it. You can even look-up when any two teams are scheduled to meet in the competition’s knock-out stages!

A new single entry visa is being piloted, in preparation for visitors coming over to South Africa for the World Cup.

This will mean that people wanting to travel to not just South Africa, but the neighbouring countries too (Mozambique, Zimbabwe, Namibia, Botswana and Swaziland) will only need one visa to cover all countries.

Mozambique is the first country who intend introducing the single visa, known as Univisa. The visa is primarily aimed at tourists from Europe and the United States.