The densest concentration of wildlife in Africa

The Ngorongoro Crater is a world-class safari attraction, and it is no wonder that it is on many peoples ‘wish list’ of places to see and visit.

This natural wonder is the largest unflooded, intact volcanic caldera in the world. The actual crater is about 20 km across and 600 meters deep, and covers 300 km².  Within the rim there are an estimated 30,000 animals, making this one of the densest concentration of wildlife within Africa. 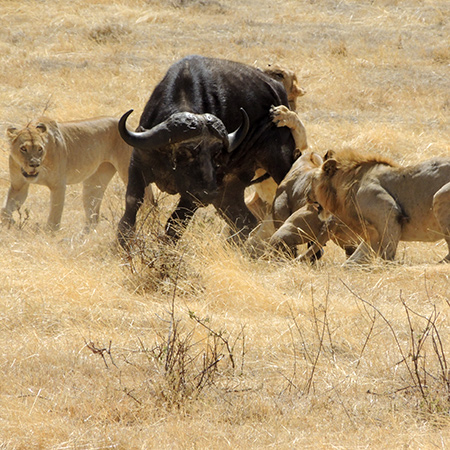 Large herds of zebra graze on the grasslands that cover the crater floor, alongside wildebeest, gazelle, eland and buffalo.   Family herds of elephants meander through the crater floor forests, pulling down foliage and branches for food.

River swamps and marshes are home to waterbuck and hippo, and are also visited by the occasional prowling leopard.  Denser forests line the crater walls, offering thick cover for the shyer bushbuck and a small population of rare and endangered black rhino.

Water birds feed around the lake's edge, careful not to get themselves trodden on by the stream of wildlife coming down to the waters edge to drink. Prides of lions lurk nearby, waiting in anticipation for the opportunity to ambush unsuspecting thirsty animals, and hyenas wait to scavenge any 'left-overs'.

The Ngorongoro Crater lies within the Ngorongoro Conservation Area, a protected area covering more than 8,000 km² of pristine African wilderness and which stretches to meet with the southern Serengeti National Park. A series of peaks and smaller volcano craters dot the horizon, creating stunning landscapes.

The northern section of the Ngorongoro Conservation Area is called the Ndutu region, which itself is worthy of a visit too, especially during December to March when the Ndutu plains are alive with the Great Migration herds. The lakes, rolling grasslands and woodland areas here, however, are home to a wealth of resident game throughout the year including elephant, antelope, giraffe, hyena, lion and cheetah. 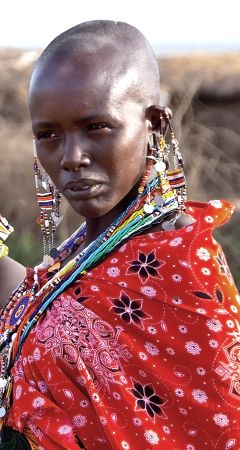 Olduvai Gorge – a famous early archaeological site where the remains of a 1.8 million year old skeleton was discovered in the early 20th century by the famous archaeologist, Dr Louis Leakey - is situated to the west of the Crater.

Aside from the wildlife, the indigenous Masai tribe also live within the borders of the Conservation Area, and herd cattle and goats through the green pastures as they have done for centuries.

A selection of luxury safari lodges are located around the outer edge of the crater.  They all offer unforgettable game viewing drives down into the crater, and many also offer guided bush walks around the crater rim, as well as drives out into the Ngorongoro Conservation Area, including excursions to Olduvai Gorge and local Masai villages. You can also stay just outside the Conservation Area, at one of the many excellent guest houses and lodges in and around the small village of Karatu.

Many people also combine a stay at the Crater with time in some of the other destinations on the well-travelled Northern Safari Circuit, including the Serengeti, Tarangire National Park and Lake Manyara. We would highly recommend a private Land Rover safari with your own highly experienced driver/guide, especially if you are visiting other areas on the Northern Circuit before or after your safari at Ngorongoro Crater, or there is also the option for a fly-in safari, which is ideal if you are tight for time.

Crater Forest Tented Camp is located near Karatu, close to the Ngorongoro Crater. Lying in a coffee plantation, this small eco-friendly camp has 15 en-suite spacious rooms which feature an African-style fire pot to keep warm at night during the chilly African winter times.

Tloma Lodge is situated within the Ngorongoro Highlands Area, just outside the village of Karatu.  The excellent location of the lodge, on the raised shoulder of a valley, offers breathtaking views over a coffee plantation and onto the Eastern wall of the magnificent Ngorongoro Crater.

The lodge is situated about 4 km off the main road leading to the Ngorongoro Conservation Area. Accommodation is in cottages or rondavels. Each room is simply decorated with local fabrics and hand-made furniture made out of African hardwood.

The Ngorongoro Farm House is a friendly lodge facing the Oldeani Volcano. It is situated on a 500 acre coffee farm located only 4 km from the Ngorongoro Conservation Area. There are 49 spacious semi-detached chalets and 3 suites.

Acacia Farm Lodge is an elegant eco-friendly boutique lodge nestled on an active farm on the outskirts of the agricultural town of Karatu. All 32 chalets are identical in size, style and amenities. Each has a private deck with sweeping views of the farm, the surrounding scenic landscape and the amazing sunsets.

All 50 suites and the Livingstone Suite have infinite views of the surrounding area. All rooms are tastefully decorated with all the amenities one would expect in a 5* establishment, including inside and outside showers, bath tub, air conditioning, a fireplace, Wi-Fi, minibar, and a private deck terrace.