Cape Agulhas is worth the relatively long drive to get here, just to say you have stood at the very trip of the entire African continent.

The Southernmost Tip of the Entire African Continent

About 110 km from Swellendam off the main N2 highway, is the southernmost tip of  the African continent, where the Atlantic Ocean meets the Indian Ocean, and high waves continually batter the windswept rocky shoreline.  It really is a desolate yet dramatic place. The official position of the tip is 34°49'58" south and 20°00'12" east, and is marked by a simple (and well photographed) plaque.

At the end of the 15th century, early Portuguese explorers named this tip 'Cabo das Agulhas' which means 'Cape of Needles'. This is because of the fact that the compass needles show no deviation between true north and magnetic north.  Many people, however, prefer to believe that it was named after the treacherous rocks and reefs that lie just off the coast. These rocks have sealed the fate of over 130 ships since those early Portuguese sailors first landed here, earning this stretch of coast the nickname 'The Ship's Graveyard'.

Cape Agulhas is also home to the second oldest lighthouse in the country.  It was built in 1848, and modelled on the Pharaohs of Alexandria lighthouse, one of the 7 Wonders of the Ancient World. It is still working today, and its beam can be seen 50 km out to sea.The lighthouse also houses a small museum, and it is possible to climb to the very top of the lighthouse tower.  If you are in need of a spot of lunch or a cup of coffee, there is also a small restaurant.

Apart from visiting the lighthouse, there really is nothing much else to do around the area, but it is certainly worth a trip if you have time to soak up the atmosphere of knowing you are standing at the very end of the African continent. 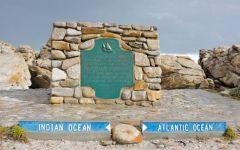