One of the largest canyons in the world

Just north of the border with South Africa, the Fish River Canyon claims to be the second largest in the world after the Grand Canyon in Arizona, USA. However, as several other canyons are also claiming to hold this title (the Great Canyon of Yarling Tsangpo River in the Himalayas, and the Copper Canyon in Mexico to name just 2),  it is probably safer to say that Fish River Canyon is ONE of the largest in the world.

It certainly is Africa's second largest, after the Blue Nile Gorge in Ethopia, but let's be honest - who actually cares what the criteria is for measuring the size of a canyon. At 160 km in length, up to 27 km wide in places, and a depth reaching up to 550 m, it is certainly impressive and one of Southern Africa's most stunning natural features. 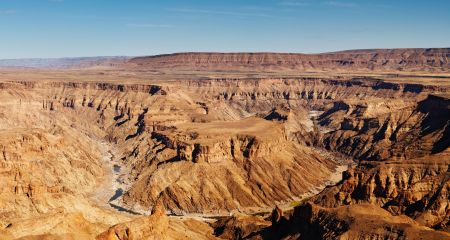 The Fish River Canyon is situated between the Namib and Kalahari deserts, and the only roads to it are across vast areas of flat and barren landscapes, sparsely populated with desert plants, quiver trees and cacti. As a result of this physical isolation, the whole place feels magical and unvisited, despite being a major tourist attraction.

It is very likely that you will have spectacular views to yourself as there are rarely more than 2 or 3 cars at any viewing point at any one time, and the only tour buses to make the long journey are the overlander companies a couple of times a week.

We would recommend a stay of 2 nights, which gives ample time to explore the canyon and the surrounding area, and also relax, before heading off on the bumpy gravel roads again!

Being desert, the temperature during the day can reach up to 40°C in the height of summer, and nights can be unbearably hot without a fan.  Summer also brings with it unpredictable heavy rain and thunderstorms, but the average rainfall is only between 50-100 mm.  The winter months between June and August are much cooler and more pleasant. 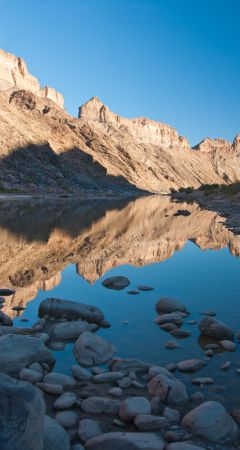 There is evidence that it has been inhabited by people for thousands of years, dating back to the Early Stone Age, and stories from the Bushmen explain how the canyon was formed...

The great serpent-god Koutein Kooru was being chased by hunters across the veld. To try to escape his pursuers, the serpent slithered off into the desert, and in doing so his body gouged the great gash in the desert floor.

Wonderful though this tale is, modern scientists believe the canyon itself was first formed over 500 million years ago by tectonic activity which caused the earth's crust to fracture. This early canyon was further deepened by glacier movement some 300 million years ago, and eventually became a natural watercourse for the Fish River.

Today, the Fish River, the longest river in Namibia, is now dammed at the Hardap Dam in the north, so by the time it reaches the Canyon its water levels are low. Between March and April, after the rainy season, the river flows at its highest through the Canyon, but during April to June, it dries up to a mere trickle, and by August there are only small puddles left on the floor.

The most popular viewing times are sunrise or sunset, mainly because the canyon walls glow a beautiful warm colour with the reflected light, and also because this avoids having to be out in the intense midday sun. The main viewing point is at the northern end of the canyon, and the view across the canyon from here is probably the most photographed shot.  The viewing point is easily accessible by a gravel road.

Hiker's View Point, just a short drive away, is the start of the 85 km Fish River hiking trail. As well as being another spectacular view of the canyon, it also offers a fantastic perspective of just how steep the canyon walls really are.

An 18 km gravel road also goes along the eastern side of the canyon to a series of other viewing points, all of which give a different perspective of the view from the canyon edge. It is possible to drive in a 2WD down to the Sulphur Spring viewing point, approximately 7 km down this road, and a short walk leads you to a wonderful view down the canyon gorge.  It is advisable to take a torch if you are going to view the sunset, because the path is quite uneven and you may stumble in the dark. A 4WD is needed to drive to the southernmost viewing point at Eagles Rock. 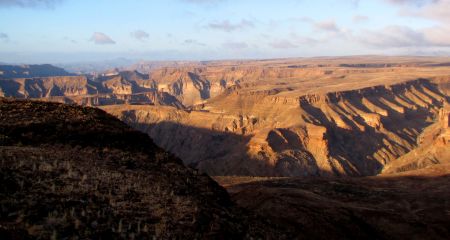 The 4 day, 85 km Fish River Hiking Trail is reputed to be one of Africa's top (and toughest) walks for nature enthusiasts. Starting at the northern end of the canyon, the trail descends into the canyon down a steep path, and follows the meandering sandy river bed all the way to the Ai-Ais Hot Springs. There are no set overnight stops along the route, so hikers are able to please themselves about how far they travel in a day and where they set up camp for the night.

The canyon and its surroundings are home to many rock dassies as well as springbok, steenbok, klipspringer and the occasional kudu and zebra. Leopards also live around the canyon, but are the hardest animal to spot. However, the real appeal of the experience is being alone in the still of the desert in one of the most remote spots on the planet.

Due to the extreme summer temperatures and the risk of flash flooding, the hike is only open from mid-April to mid-September. It is only recommended for the extremely fit, and you must have a doctor's certificate of fitness in order to obtain your permit.  Advance bookings are necessary, and there must be a minimum of 3 per group. Hikers must take all their food with them, but water is available from the river, but for safety should be boiled or purified.

Unfortunately, since a tourist was killed in the canyon on an unsupervised day hike, the canyon is closed now to hiking of any nature apart from the 4 day trail.

At the southern end of the Fish River Canyon is the Ai-Ais Hot Springs Resort, which is owned and run by Namibia Wildlife Resorts. 'Ai-Ais' in Nama means 'burning water', and this is an extremely apt name, as the thermal water can reach temperatures of up to 65°C. The water is pumped into indoor baths, a jacuzzi, and a large outdoor swimming pool. The water is high in minerals, and has a reputedly healing affect for rheumatism sufferers. Open all year round, this is a popular family destination for South Africans and Namibians, especially during school holidays.

Fish River Lodge is the only lodge perched directly on the rim of the Fish River Canyon, offering guests breathtaking views of the canyon from sunrise to sunset. Twenty spacious chalets are positioned along the rim with sufficient distance from each other to ensure privacy and quiet at all times.

Just 20 km from the main viewpoint of the Fish River Canyon is Canon Lodge, an oasis seemingly in the middle of nowhere. Tall weather-beaten graynite boulders mark the location of the lodge and form an integral part of the overall design.

The Canyon Village affords easy access to the Fish River Canyon, which is only 20 km away. Suitable for a striking film set, Canyon Village lies at the foot of a sweeping rock face. Explore and discover this ancient wonderland, or simply luxuriate in the peace and quiet.