The 500 km stretch of coast from the Ugab River heading northwards as far as the Kunene River on the Angolan border is known as the Skeleton Coast, and accounts for about one-third of Namibia's coastline. 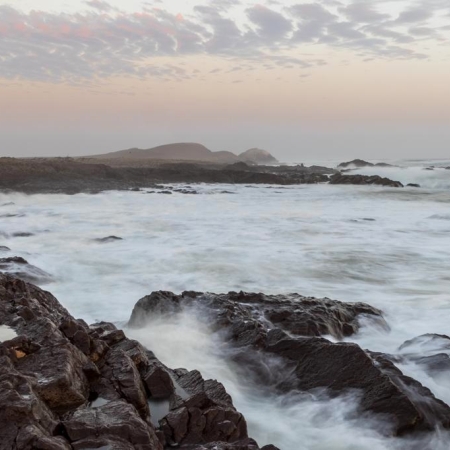 Establised in 1971, the Park gets its name not only from the huge number of bleached white whale and seal skeletons that litter the beaches here, dating back to when the whaling industry was active, but also from the many shipwrecks that have happened on the treacherous rocks over the centuries since the early Portuguese and Dutch explorers attempted to find a route around Africa to India.

It is estimated that over a thousand vessels were washed up on the coastline, making this the largest ship graveyard in the world.

The sailors who did survive the strong ocean currents and made it to land subsequently then died of thirst in the harsh and arid desert conditions. Their skeletons and the wrecked remains of their ships contributed to the Park's rather sombre naming.

The Portuguese sailors used to refer to it as the 'Gates of Hell', and the local San people or Bushmen still call it 'The Land God Made in Anger'. Today, this eerie and desolate coastline of roaring sand dunes, bleached bones, shipwreck remains and fog shrouded beaches has been preserved as a National Park, and is one of the highlights of a visit to Namibia.

Stretching 40 km inland as well as along the northern Namibian coastline, the Skeleton Coast National Park is a truly fascinating area. 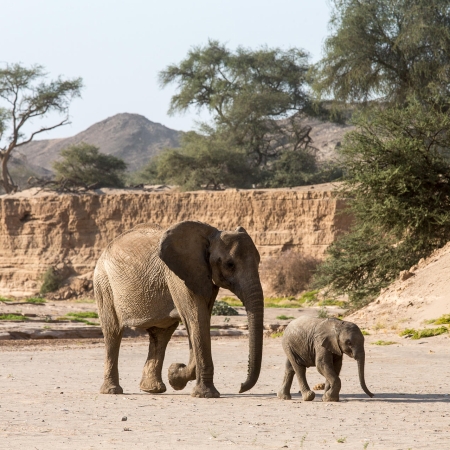 The cold Atlantic Ocean crashes onto the shores which turn into the Namib Desert - a vast desert landscape with wind sculptured sand dunes and gentle rolling sand ridges as far as the eye can see, interspersed with rock formations and desert vegetation which add a splash of natural colour to the otherwise stark vista.

With only a couple of luxury lodges permitted to operate in the Park itself, visitors who do make this part of their holiday itinerary can rest assured that they will be experiencing the beauty of the Park with very few other people around. They will also be just one of a handful of people who make the journey here, as visitor numbers are restricted every year to preserve the environment.

Whilst the desert surroundings and rocky coastline may have been inhospitable to the earlier sailors who lost their lives here, there is a thriving wildlife presence who have adapted to the conditions here.

Desert adapted elephants roam the parched riverbeds seeking underground water springs and feeding off the grass and trees who in turn thrive by drawing moisture from the daily Atlantic Ocean fog that creeps over the desert floor.

Oryx are a common sighting, and springbok, jackal, brown hyena, rhino, zebra and giraffe may also spotted on the nature drives that head out from the lodges.

Huge Cape fur seal colonies are found dotted along the coastline itself, whilst further inland, the desert adapted lion prowls in search of food. 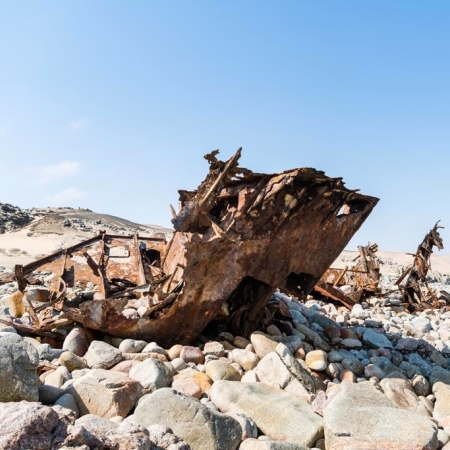 The southern section of the Skeleton Coast Park which stretches from the Ugab River up to the Hoanib River is the only area where it is possible to visit as a day visitor IF you are prepared for a 4 hour drive from Swakopmund to get here (and of course you have the 4 hour drive back again too).

It is an extremely long round trip, and many visitors leave feeling disappointed as the coastline is basically the same as that outside the Park between Swakopmund and the gate.

It is possible for the independent traveller to stay overnight in the southern area of the Park at either the campsite at Torra Bay or in self catering chalets at Terrace Bay, just slightly further north, especially if you are en-route to Damaraland or Kaokoland.

Torra Bay is only open December to January, but Terrace Bay is open all year round. Accommodation is basic and has to be booked for and paid in advance, and confirmation of your booking must be shown at the entry gate otherwise you will be refused entry.

The shore based fishing here is excellent, so often your neighbours will be avid anglers.

In a country jam-packed with vast, spectacularly beautiful landscapes, Kaokoland may just be the most incredible of them all. The camp is only accessible by light aircraft and the camp itself consists of only 7 twin-bedded tents and one family unit, each comprising stylish en-suite bedrooms with shaded outdoors decks.

Shipwreck Lodge is located in the famous Skeleton Coast Central Concession and a stay here will never fail to impress.