Damaraland is a beautiful region, boasting spectacular desert vistas, some of the most impressive mountains in Namibia, plants that live for hundreds of years and starry nights that can take your breath away.

Probably the biggest single attraction of the region for most overseas visitors is the chance to track the rare desert dwelling elephants and free-roaming black rhino - indeed, Damaraland is one of the few places in Southern Africa where the magnificent wildlife of Africa can be found outside of National Parks or private game reserves, and co-exist with traditional villages and farms. 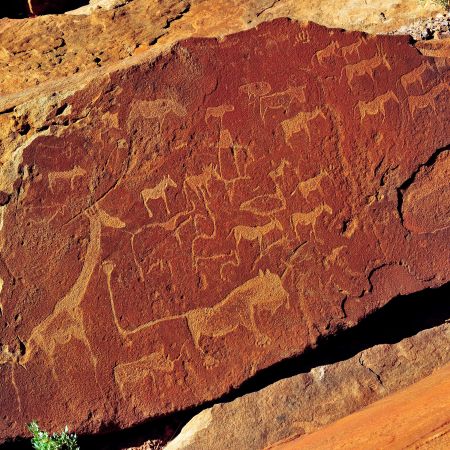 Bushman paintings and engravings of the region can be found at Twyfelfontein, the Brandberg and Spitzkoppe, and these places, along with the remarkable Vingerklip, are the most frequently visited 'sights' in Damaraland.  Having said this, part of the attraction of this region is that there are so many beautiful places that do not seem to have a name!

Whilst Damaraland is a desert region with less than 100 mm of rain annually, the whole area can become green and lush with grasslands during the March to May rainy season turning the whole area into a scenic highlight.

Despite its many attractions, Damaraland still remains one of Namibia's less visited areas.

There are a number of excellent lodges that arrange trips tracking the desert elephants and black rhino.  You may not see either elephants or rhino in Damaraland unless you join an organised trip to find them - this is not a National Park, and is not set-up for self-drive wildlife viewing!

Whilst none of the operators who offer these trips can guarantee success, sightings are normally pretty common. The guides monitor where the elephants and rhinos were last seen, and the direction they were heading in.

The desert elephants of Namibia are one group of only two known populations of desert-dwelling elephants in the world. The other group are in Mali, and both are an awesome illustration of how adaptable animals can be. 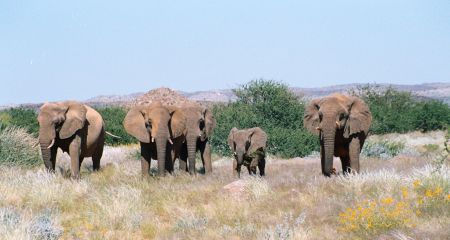 Whilst genetically no different from their cousins who live in wetter lands with a greater abundance of food, these remarkable creatures have adapted their behaviour to the harsh conditions of the desert.  They eat less, drink less, and walk up to 70 km per day to feed and find water. Although surface water is extremely scarce, the elephants appear to have a marvellous knack for remembering where the nearest water supply is - and not necessarily a natural waterhole - they are not adverse to knocking over a farmer's water tank!

Because they walk such great distances in a day too, their legs appear to be slimmer than their National Park cousins, which has also given rise to the 'myth' that desert elephants have bigger feet - this isn't actually the case, their feet just look bigger against their narrower legs!  They are now a protected species, following extensive poaching in the early 1980s, which drastically reduced their numbers.  It is estimated that their population today is approximately 600. 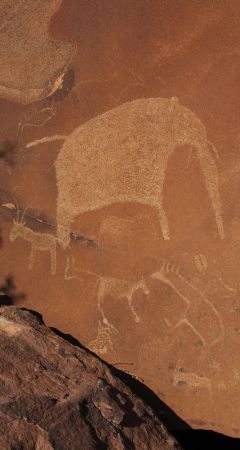 Namibia is the only country with the last free-roaming black rhinos in the world.

Although they have occasionally been observed in groups of 6, mostly the black rhino is a solitary animal. The desert black rhino have very large home ranges, measuring 500 to 600 km², and are known to cover great distances in search of food, and can survive without water for 4 days.

Twyfelfontein means 'doubtful spring' in Afrikaans and is named after the small freshwater spring on the hillside which produces too little water each day to sustain a permanent settlement.  This same spring was known as Uri-Ais, 'jumping spring', to the Damara who have inhabited the area for some 5,000 years, and historically this would have been a rare source of precious water for both people and the wildlife of the area.

The rock engravings of the ancient Damara inhabitants are the major attraction of this area, and some 2,500 engravings dating back to 300 BC have been discovered at the site. The vast majority of the engravings are of the animals that would have been hunted in the area.

You need to either be part of an organised trip or take the services of one of the guides based at the site, and you should allow 1½ to 2 hours to cover the whole site.  Whilst the walking trail that covers the site is not strenuous, visitors should be aware that there is a fair amount of scrabbling over rocks required in some places. 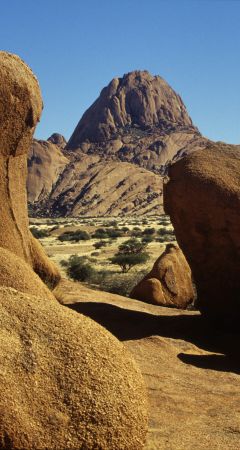 The Brandberg Massif is 40 km northwest of Uis and contains Namibia's highest peak (2,573m) and a number of bushman paintings and engravings including the White Lady.  To get to the White Lady you need to employ a local guide and be prepared for an enjoyable, if fairly strenuous, walk of around 45 minutes.

Spitzkoppe is one of Namibia's most striking and famous mountains, and its distinctive profile has caused some people to call it Africa's Matterhorn.  Aside from serious mountaineers looking to tackle the peak, most visitors come to see the Bushman paintings concentrated in the area around Bushman's Paradise.

The Vingerklip is a 35m tall rock which looks to be precariously balanced on the top of a small hill 75 km east of Khorixas. It is far and away the youngest of the major geological attractions of the area, and was formed by water erosion some 15 million years ago. There are numerous walks around the area and to the base of the Vingerklip itself which offer excellent views of the whole valley. The Vingerklip makes an interesting detour en-route between Etosha and Damaraland.

Organ Pipes And The Burnt Mountain

The Organ Pipes are slender dolerite columns that  line the sides of a small river course and are around 120 million years old and up to 4 metres tall.  Although an interesting geological formation, they are not a major attraction.The Burnt Mountain also has an interesting geological history and was formed by volcanic activity around 10 million years before the Organ Pipes. To most casual observers it resembles the waste product of a small mining operation.

The Petrified Forest is a little further away from Twyfelfontein and is the petrified remains of around 50 trees carried into the area by floodwaters 260 million years ago. The wood is remarkably well preserved, however some visitors feel that describing the half buried remains of incomplete tree-trunks as a 'forest' is stretching creative licence a little. Visitors to the Petrified Forest are required to use a local guide.

The welwitschia (welwitschia mirabilis) is unique to the Namib desert, and has to be one of the most remarkable plants on the planet. At first glance, you would be forgiven for thinking that this short plant, with its stout woody stem and battered leaves, is well and truly dead. Quite the reverse is however true.  It is alive and growing in the harsh desert conditions, and the oldest living specimens of welwitschia are estimated to be between 1,500 to 2,000 years old. The plant survives the arid desert conditions by absorbing moisture from the fog that flows over the desert from the coast.

Mowani Mountain Camp is found in the vast, unspoilt wilderness between the Ugab and Huab Rivers in Southern Damaraland. The luxury ensuite  tents, each with its own private deck overlooking the desert landscape,are built unobtrusively so as to ensure minimum impact on the natural environment.

The 6 suites are hidden amongst the granite boulders that nestle the camp and the more temperate climate of central Damaraland allows for naturally ventilated suites, partial open-air bathrooms and largely open communal areas.

Damaraland Camp comprises of 10 large and extremely comfortable 'Meru-style' walk-in tents, each with their own private patio with stunning views of the Huab River Valley. Each tent has its own en-suite bathroom, where the hot water is solar powered.

Desert Rhino Camp is a luxury tented camp run in conjunction with the 'Save the Rhino Trust', in the private Palmwag area of the rugged northern Damaraland. The camp's accommodation consists of 8 large 'Meru-style' walk-in tents with en-suite facilities, including bucket showers and solar-powered hot water.

Etendeka Mountain Camp is located in the foothills of the Grootberg massif, in stunning scenery set amidst the ancient Etendeka lava flows of northern Damaraland. Accommodation is in 10 en-suite meru tents, which are connected by pathways to the main dining tent.

The Twyfelfontein Country Lodge is located in the Huab valley in Namibia's Kunene/Damaraland region, and is a popular base for visitors exploring the area. Accommodation comprises 56 spacious en-suite rooms, each of which has magnificent views of the surrounding plains or mountains.