The African wild dog, or the Painted Dog as it is also called, is now unfortunately one of Africa’s endangered species. Changing habitats and disease have caused the population to drop rapidly, and it is estimated that there are now only between 3,000 and 5,000 left in the wild.

Unlike their domestic doggy cousins, the African wild dog only has 4 toes per foot (your pet at home has 5 toes on their forefeet).  They need a very large territory to roam over, and home territories can cover up to 1,500 square kilometres.  They are very sociable creatures, living in packs of up to 30.  Before a hunt, the pack will gather together to nose rub and lick each other, whilst wagging their tails and making high-pitched noises.

Seeing these beautiful creatures while on safari is a  priviledged sighting, and sometimes it can be a pretty gruesome one too, if you are unlucky (or lucky, depending on your mindset) to catch them on a kill.  Ferocious hunters, they work as a pack and will literally chase their prey to death, as the wild dog can reach speeds of up to 40-50 mph, although they can only sustain this speed for short distances.  The pack will simply pull down it’s exhausted prey, and before the poor animal has hit the ground, the pack are already starting to tear it apart.  A pack have been known to eat an entire gazelle within 15 minutes.

There are a few places where seeing wild dog can be part of your safari experience.  The Ol Pejeta Conservancy in Kenya has an impressive 2 pack population, currently totalling 32 individuals. The Selous Game Reserve in southern Tanzania is home to approximately one-third of the world’s wild dogs.    The Madikwe Game Reserve in South Africa has a thriving and active population, with 3 different hunting packs calling the reserve their home.  And the Kwando region of Botswana has the reputation of being the place to visit to encounter wild dog. 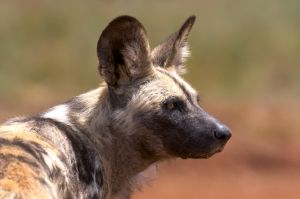 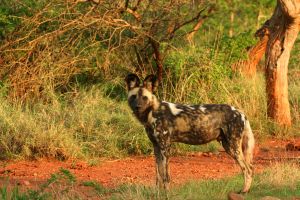 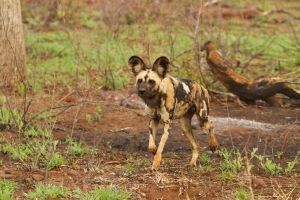 Comments Off on Seeing the Wild Dogs of Africa