The iconic heart of Cape Town

The World Heritage Site of Table Mountain rises over 1,000m above Cape Town, and can be seen from 150 km out to sea.  Its flattened peak makes it one of the most recognisable mountains in the world, and you simply can't visit Cape Town without making a trip to the top. One of 2 cable cars, each capable of holding up to 65 passengers, whisks you up the mountain to the top in less than 5 minutes. The 360 degree rotating floor adds to the excitement, giving everyone on board the opportunity to look out over the spectacular scenery. As well as great fun, it is an excellent way to orientate yourself to the layout of the city. 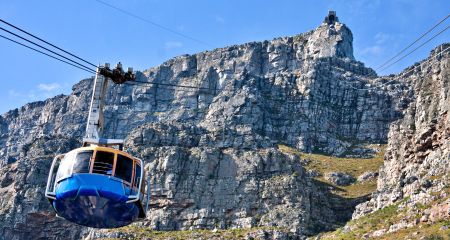 Many trails wind across the rocky flattened 'tabletop' summit, each leading to different viewpoints over the city and the Bay. There are also great views of the neighbouring Devil's Peak, Lions Head and Signal Hill (whose name is taken from when flags were flown to warn of approaching ships, and from where the Noon Day Gun is fired at midday every day apart from Sundays), as well as views along the jagged peaks of the Twelve Apostles mountain range, and Robben Island out in the bay. There is a small restaurant and cocktail bar at the top, and a souvenir shop too.

The mountain is also home to countless birds and over 1,400 species of fynbos, as well as the inquisitive rock dassie (or hyrax) - a small rodent-like mammal who lives amongst the rocky areas, and can often been seen basking in the sunshine, until alarmed - then they can move pretty fast!

Table Mountain is also wheelchair accessible. There are lifts which take wheelchair users up to the cable car departure area. Wheelchairs can easily fit into the cable cars and the windows are low enough so that you can still see the views. Once at the top, a few of the trails are wheelchair friendly, plus the cafe has ramps.

There are other ways to get up (or down) Table Mountain. Hiking up the mountain is extremely popular, and there are many different paths to choose from.  Not surprisingly, it is a long slog to the top, and you should allow yourself plenty of time to get up and back down again - anything up to 6 hours if you also want to spend some time at the top.

It is also possible to arrange to do a guided half day or full day hike up the mountain if you prefer. However, if, having hiked up one way, you don't fancy the hike back down again, there is always the option to abseil down one of the vertical cliff faces of the mountain...currently the world's highest abseil at 112m high.