For many people, their exciting safari experience will only involve seeing Arica's wildlife from the elevated position of an open game viewing vehicle, or even from the comfort of their own enclosed hire car.

However, for some, they will get to also to experience the thrill of a walking safari with a knowledgeable guide.  If you have always dreamed of being an 'intrepid' explorer, then this will certainly achieve your goal. 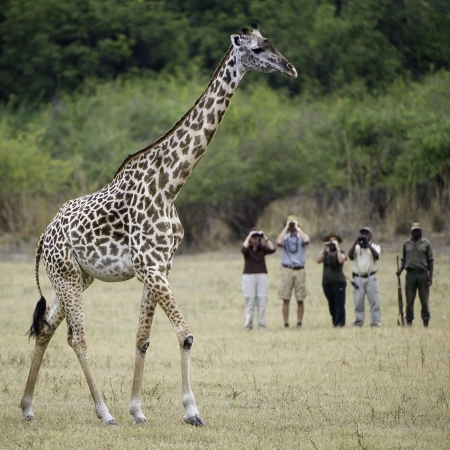 A walking safari truly gives you a different perspective of the wild African bush.  Walking through the bush opens your eyes to sights that you otherwise would have missed from your vehicle - the tiny tracks made by an army of ants, for example, or the intricate spider's web hidden in the branches of an acacia bush.

But it is not only your eyes that will be amazed.  Your ears become tuned to the smallest noises of the African bush, sounds that otherwise the engine would have drowned out.  Listen as the wind blows through the trees, hear the sound of the woodpecker, and even notice the distant alarm call of an impala.

The bush has a distinct smell to it too - fresh and almost 'buttery'.  And use your last sense - touch - to feel the texture of the different leaves, or run your finger over the pawprint of the lion who passed by late last night, leaving his print embedded in the fresh dew-laden earth.

As this is the African bush, the wildlife will still be there, and if you are lucky, you will get to encounter some of it.

There is something magical about standing still while a herd of zebra graze in front of you, or a giraffe peers out at you from between the tree branches, or watching quietly from a safe distance as an elephant meanders down to the waterhole for a drink, or even seeing the tip of a lion's tail as he disappears into the the bush in front of you.

Your guide will not put you in any danger, but it is obviously imperative that you listen carefully to what he says at all times, and do exactly as he tells you.

Guides are not allowed to take guests out unless they are fully trained, and for safety reasons, they also have to carry a gun.  Don't be put off by the gun, it adds to the sense of adventure as you venture into the wild, unknown bush - and of course, hopefully he will not have to use his gun, but it is still a comfort factor to know that it is there just in case! 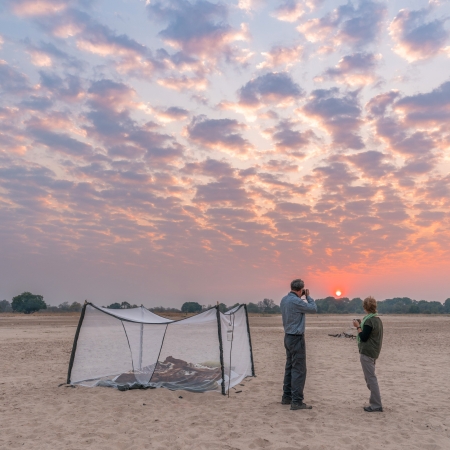 Generally children younger than 12 are not allowed on walking safaris of any nature, for safety reasons, but  some lodges specify that children must be over 16 to participate.

You do not have to be super-fit to go on a walking safari.  Many lodges and camps will offer gentle bush walks after breakfast, normally lasting an hour or 90 minutes tops, if you do not feel inclined to walk much further, but you still want to get close to nature.

Other walking safaris can involve full day but still slow paced walks through the bush with a picnic lunch, or you can book a 3 or 4 day walking safari that involves walking from camp to camp.

Don't worry however, you do not have to carry your luggage with you - all you need to worry about is packing your bags before you depart, and when you arrive at your new camp, as if by magic your bags are waiting for you.

For the really adventurous, try a walking safari that ends with camping out in the middle of the bush, with just a mosquito net between you and the starry African sky.

Where can I do a Walking Safari?

Zambia was the first safari destination to really offer walking safaris, pioneered by Norman Carr and Robin Pope back in the 1950s and 1960s.  Today, some of the best walking safari experiences can be enjoyed here.

Some lodges in Kenya such as Porini Amboseli also offers walking safari adventures, which involve camping out in a small dome tent after a full day day of bush walking - often referred to as 'fly-camping'. The experiences tend to be for just one night - and your room is still waiting for you at the main camp should you have a change of heart!

Most of the private lodges in South Africa will include a short bush walk after breakfast within your fully-inclusive rate, and some lodges, such as Rhino Plains Camp and Africa on Foot in the world-famous Kruger National Park, offer guests morning and afternoon walking safaris instead of traditional game drives.  There are also several operators who offer longer walking safaris of 2 nights which involve camping out in the bush, such as the Shamwari Explorer Camp in the malaria-free Eastern Cape.