Zambian-born Robin Pope founded the company that bears his name in 1986, and Robin Pope Safaris is now well established as one of the top safari companies operating in Zambia.  Since it began operating, Robin Pope Safaris has developed a fine reputation internationally for the quality of their safaris, the comfort of their camps and for the excellence of their guiding and hosting.

All the safari camps within the Robin Pope Safaris portfolio are situated within the Luangwa Valley, both inside and outside the South Luangwa National Park. The camps are designed to retain both levels of comfort and convenience while emphasizing the wilderness experience. The camps are all intimate and highly personalised, yet simple and elegant. In keeping with their philosophy of keeping the focus on the bush, the main structures of the camps are open to the bush, and to complement this, all the rooms also have excellent views and mostly open air bathrooms. 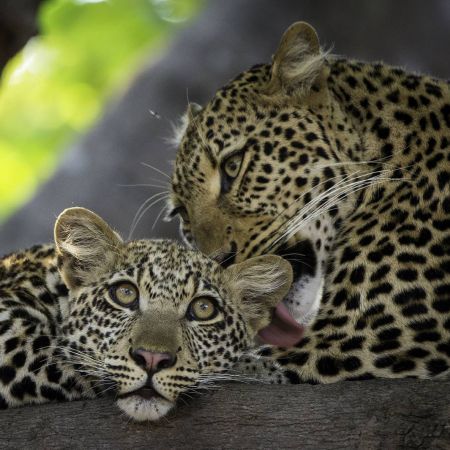 The specialties of a safari with RPS are:

Walking - the only way to really discover the secrets of the bush. Walks are led by an experienced naturalist and accompanied by an armed game scout.

Boating - during the months of December to April the Luangwa River is rising and falling depending on the rainfall. January to March it is flowing bank to bank. At times it is near full and pouring into the adjacent lagoons. Whatever the level, boating on the river during these months is simply magical.

Game drives - conducted in open 4WD vehicles by knowledgeable safari guides. Special game viewing seats provide excellent viewing and opportunities for photography. There are only 2 guests per row so everyone has a “window seat”.

Night drives - these set out in the afternoon. Later, after watching the sun set over the river with a sundowner in hand, the drive continues with a powerful spotlight. The nocturnal world of the bush is witnessed from owls and genets to hunting lions and the graceful leopard.

Guides - are key to a successful safari. Not only are guests looking for knowledgeable naturalists with enthusiasm for the bush but also for people that will give them a really enjoyable time.

The guides at RPS are well trained and are confident, fun hosts.  The company are committed to working with the local community, and 17 out of 20 guides are local people. Robin himself has been guiding in the South Luangwa since 1975. For the first 10 years he worked for other safari companies and then started his own company with just one camp, which is still in the portfolio today - Tena Tena Camp. Since then the company has developed considerably and has had a significant input in the development of the tourist industry in Zambia.

RPS also operate in Victoria Falls and Malawi, helping also to drive tourism to this developing area as well.

Robin Pope Safaris strives to provide a safari that will do far more than simply satisfy the desire to see African game. As one journalist put it..."Their camps take, at most, a dozen pampered visitors, everyone of whom is treated as a personal house guest and new best friend. Robin Pope Safaris have set a standard that has become Zambia’s benchmark for excellence and their guides are astonishingly knowledgeable naturalists.”

Set on a hill bordering the Mosi-oa-Tunya National Park and overlooking unspoilt bush, Stanley Safari Lodge is only 3 km from the Victoria Falls.  The atmosphere at the Lodge is tranquil and intimate, and with only 10 private cottages or suites your hosts are able to give guests a truly personal service.

Nkwali is located on a private stretch of land, overlooking the South Luangwa National Park. The area surrounding Nkwali is superb game viewing country, with a beautiful area of ebony woodland and open grasslands. The 6 chalets are large, cool and spacious, with a great view of the river.

Tena Tena is a remote and small camp and enjoys a stunning location on a sweeping bend of the Luangwa River. The 6 tented rooms are spacious but cozy. Each tent is adapted to its specific location so as to maximize privacy, and each has room a gorgeous view across the river from its a private veranda.

The Luangwa Safari House is an extraordinary private house that is booked on an exclusive basis, and is ideal for families or groups of friends travelling together.

Robin's House is the perfect place for a family safari, honeymooners and guests looking for a little privacy. The house is booked on an exclusive only basis, and is located on the same stretch of private land as Nkwali Camp.