Sightings of spotted hyena are quite rare due to their low numbers, therefore any sighting of these magnificent animals is a special one – but recently guests at Lion Sands River Lodge and Lion Sands Ivory Lodge, in the Sabi Sand Game Reserve, were treated to the most incredible sighting !

One of the rangers had located a den site about a month ago after following an adult female hyena traveling down one of the roads at a rapid pace. She followed the road for a while, then moved into the vegetation. 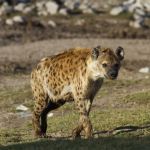 There the ranger found an incredible den site under a large rock, and there were 3 cubs at the site – 2 cubs of approximately 2 months of age and one cub was younger than a month.

Guests at the lodge have had several awesome sightings of these cubs playing around the den site but last week everyone noticed that there were now 5 cubs – 2 tiny cubs have now joined the clan and can be seen peering out of the dens site, still a little nervous to venture out …

These are highly social animals, living in clans whose size is related to the food supply available. The stable core of the clan is females and as a result males disperse. 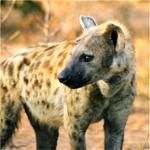 There are separate dominance hierarchies among males and females and females dominate all males. High-ranking females have priority of access to food and to resting sites near the den entrance and as a result they rear more cubs than low-rankers.

All the females in the clan breed and their cubs den together but each female suckles only her own young.