Murchison Falls National Park is Uganda's largest National Park where 4 of the Big 5 (Cape buffalo, elephant, lion, and leopard) can be seen, alongside a healthy population of Ugandan kob, other plains game, giraffe, and forest primates. 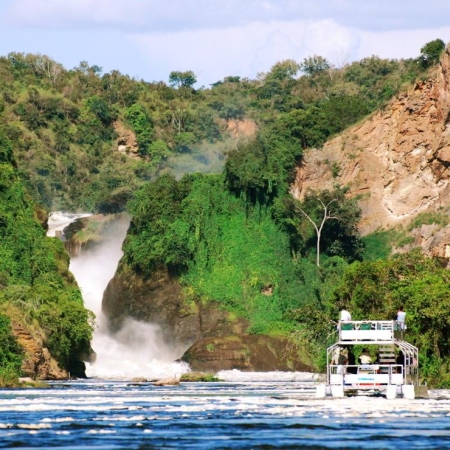 The Park is also home to one of Africa's largest shoebill populations and over 450 other bird species.

Covering 3,890 square km, the Park sits in the northwest of Uganda, and is about an 8-9 hour drive from Kampala, or a short one hour flight from Entebbe. The Park is divided in two by the River Nile, the longest river in the world which flows through the Park for 120 km as part of its 6,500 km journey from Lake Victoria to Egypt and eventually the Mediterranean Sea.

The northern side of the Park accounts for about one third of the land mass, but is home to about 80% of the game. Game drives head out in the morning and afternoon in search of the wildlife, and chimpanzee tracking can also be enjoyed in the Budongo Forest, which is situated in the south of the Park.

Aside from the game, the Park is also famous for the Murchison Falls, where the mighty Nile crashes through a stretch of rapids and eventually is forced down a narrow 8m gap and thunders down a 45m cliff into the vast 'Devil's Cauldron' (otherwise known as Fajao Gorge), creating a spectacular waterfall and rainbow.

A popular way to see the Falls is to take a cruise to the base of the Falls, where the views, sheer power and noise of the Falls from such a close-up perspective are truly breath-taking. 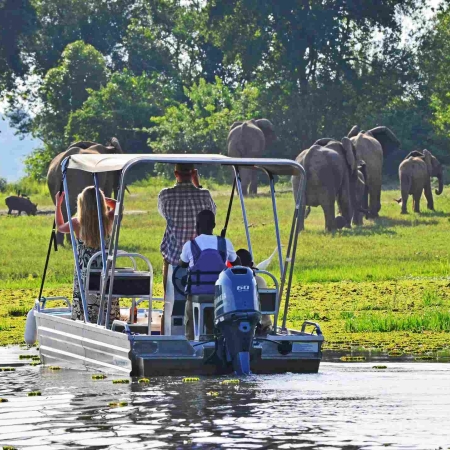 Large resident populations of hippo float in the water along the way, groups of crocodile bask on the shore, and herds of elephant, buffalo and antelope can be seen moving along the riverbanks searching for food as well as coming down to the water's edge to drink.

The river offers spectacular opportunities for bird watchers, too, with a wide range of water birds and vibrant Bee-eaters nesting in the cliffs along the riverbanks.

Another boat-based activity is a boat trip along the Nile into the Victoria Nile Delta, at the top of Lake Albert. Home to a wide variety of wetlands and papyrus, birders will encounter many endemic bird species along the way, including the elusive shoebill.

You will also have the opportunity to spot wildlife such as hippo, elephants and large crocodiles.

The constantly changing scenery as the Nile River winds its way to Lake Albert is another plus point of the cruise.

You can also do a hot-air balloon safari to see the Falls from a birds-eye perspective.

If you prefer to keep your feet on firm ground, there are walking trails to the top of the Falls. Depending on your level of fitness, the walk should take about 45 minutes. 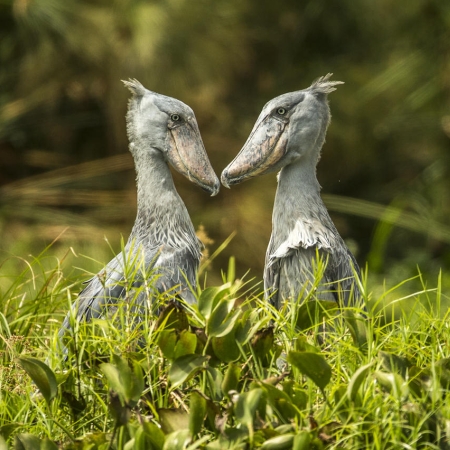 The waters at the base of the Falls attract large Nile perch and cat fish, so fishing trips (on a strictly 'catch and release' system) take out keen fishermen and novices to see if they can land themselve a prize catch.

With all the activities available, as well as the need to have some relaxation time, a minimum stay of 2 nights but ideally 3 nights is recommended to make sure you do not miss out on anything.

En-Route to the Park

For guests who decide to take the road transfer instead of flying, the journey can be broken up with a visit to the Ziwa Rhino Sanctuary, the only place in Uganda where you can see rhino.

The sanctuary is currently home to 22 white rhino, and visitors can head through the bush on foot with their guide to see the rhino in their natural habitat.

The sanctuary covers 7,000 hectares and the rhino are free to move around the entire area, so it may be necessary to drive to the area where the rhinos are, before the trek. You may also encounter other wildlife such as Ugandan kobs, bush bucks, water bucks and several bird species.

Each of the 54 rooms are a haven of style and serenity, complete with balcony and private bathroom. Guests can choose from Standard Rooms, Suites, Safari Tents and there is also a two bedroom Cottage which is ideal for families.