We are delighted to have been nominated in the British Travel Awards 2018 in the “Best Safari, Wildlife & Nature Holiday Company” and “Best Holiday Company to Africa” categories. 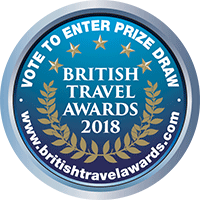 These industry-leading awards are often called the Oscars of the travel industry, and the winners are decided by public vote and announced at a gala dinner in London later in the year.

Voting is really simple using the form here, and everybody who votes is entered into a prize draw to win one of a number of fantastic holidays and travel prizes.  It’s not limited to UK residents, so our overseas clients can vote too.

Voting closes at midnight on the 30th September, and the prize draw winners will be notified by email address week commencing 15th October 2018.

Many thanks for your support, and good luck in the prize draw!