In the UK today, a lot of people woke up (or indeed may not have even slept) to gale force winds this morning howling around our windows. Homes are without electricity, train services have been cancelled, and flood warnings have been issued.

For anyone holidaying in Cape Town today, however, they can also get their fare share of wind, but it will be slightly more enjoyable! One of my favourite places to go when I used to live in Cape Town was to head out of the city towards Bloubergstrand Beach, which is about a 20 minute drive (traffic depending, of course!). Not only is it THE place to go to take that ‘picture postcard’ shot of Table Mountain from across the bay, it is also THE place to go if you are a kite surfer.  Not that I am a kite surfer, I hasten to add.  But I used to love walking along the beach and just watching the mad keen kite surfers throw themselves around in the waves.

The beach is popular with kite surfers because of the large waves and the 10 – 30 knot winds (which do make sun-bathing on the beach a tad uncomfortable unless you are into being sandblasted constantly – saves getting a expensive body exfoliation at the Spa I suppose though).

Kite surfing, for the uniatiated, involves harnessing yourself to a board and a power kite, and letting the wind propel the kite and you across the waves.  The French kitesurfer Sebastien Cattelan became the first person to break the 50 knots speed barrier by reaching 50.26 knots in October 2008 in Luderitz, Namibia, but since then, this record has been broken several times, and the current record is held by Rob Douglas for reaching speeds of 55.65 knots over a 500 m distance.  Talking of distances, Francisco Lufinha is the distance record holder, having kitesurfed an amazing  537 km  from Gaia (Portugal) to Algarve (Portugal) in September 2013.   And did you know that Sir Richard Branson also holds the record as being not only the oldest person to have kitesurfed across the English Channel (in July 2012), but also holds the record (along with 317 other kitesurfers) to have formed the largest parade of kitesurfers to complete a one mile course (in Hampshire in September 2013).

If you fancy learning to kite surf while you are on holiday in Cape Town, there are several operators that you can contact who can teach you to kite surf, either in the ocean or in the calm safety of a lagoon.  Courses tend to run from mid-September through to March.   You can also rent equipment too if you are an experienced kite surfer already and you want to loop, flip, roll or shred whilst admiring Table Mountain from your board.

Whether you want to just watch or participate, either way I can definately recommend a trip to Bloubergstrand! 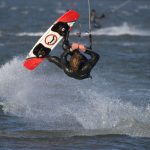 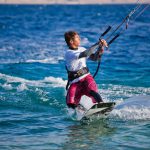 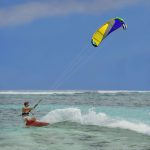 Comments Off on Windy Day Blues?