Hot off the press, thanks to a newsletter just in from the wonderful Alex Walters.

Always had a yearning to see wild dogs? Well, you should go to the Selinda Reserve in northern Botswana immediately.  Guests and guides here have had the pleasure of not just one wild dog pack denning in the area – BUT THREE!  And with pups too.  Can it seriously get any better?

Every year, the normal resident wild dog pack here will den in June or July, and in the past, there have been as many as 15 cute little puppies emerging as a result of the mating between the alpha male and the alpha female.  This year, however, not one, not two, but three packs are denning – as a result of the splintering of the initial pack and subsequent interaction between neighbouring packs.   Sounds like the basis for a wildlife ‘soap’, doesn’t it – the wild dog version of EastEnders.

Despite this huge abundance of pups, wild dogs are still one of the rarest/endangered species in Africa, and it is estimated that less than 3,500 exist in the wild now.

They can cover a huge area when hunting (their territories can be as large as 500 square kilometres), and can reach speeds of up to 55 km/h and maintain this speed too for several kilometres.  They hunt by literally running down their prey until the prey is absolutely exhausted.  Wild dogs are known for their violent kills – in that they jump in immediately and start eating (or rather tearing) up the prey, regardless of whether it is still breathing or not.  A bit gruesome to watch, I will admit, but something I have been very privilidged to have witnessed.  And have a thousand photos or so to prove it too.

Wild dogs are sociable animals, but the packs have a strict hierachy, in that there is normally only one alpha/main male and one alpha female.  Only the alpha pack members are allowed to mate and therefore reproduce.  Only when the alpha couple are unable to reproduce or one of them dies, then a new dog can come into ‘power’. 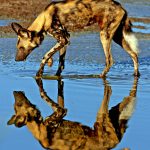 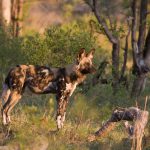 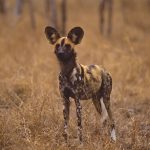 Comments Off on Woof Woof!!!