Did you know? B is for Bushbaby

One of the cutest and smallest creatures of the African bush, the bushbaby is native to more than 25 African countries. Their name comes from their distinctive call, which sounds just like a baby crying.

They are nocturnal animals, but often the sharp eagle-eyes of the tracker or ranger can spot a bushbaby lurking in the branches of a tree, and guests are treated to a unique viewing with the aid of the night game-drive spotlight.  This has also led to their South African name of ‘nagapie’, which means ‘little night monkey’ in Afrikaans.  For anyone learning Afrikaans, you pronounce this nark-ahh-pees (not nag-a-pie, which is the mistake I have just made in front of my South African work colleague).

They are very particular about their appearance, and will groom themselves fastidiously before embarking on a night of foraging for insects, lizards, small birds and fruit.

The eyes of a bushbaby are incredibly large which give them their excellent night vision, but they cannot their eyes swivel in the sockets, so they are forever moving their heads when searching for prey, giving them a further comical appearance.

Their large ears give them very acute hearing, and their strong hind legs enable them to jump high – the highest recorded jump was 2.25 metres.

Despite their good eyesight and hearing and jumping skills, they do still have to be careful when out, as they are favourites on the evening dinner menu of owls, snakes, servals, African wild cats and genets. 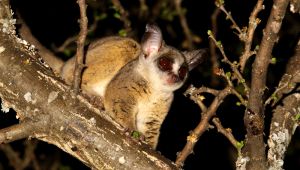 Comments Off on Did you know? B is for Bushbaby