There is a current rumour that Kenya are once again looking at banning beach traders from their beaches.

True, sometimes these people can be annoying, and in some cases, a bit intimidating. You are out for a quiet (and possibly romantic) beach walk, and you do not want to be hassled by someone trying to sell you a pair of fake RayBan sunglasses, or a hand-carved giraffe, or a camel ride. They are certainly persistent – I have been followed for about 15 minutes in the past, and no amount of saying no seemed to get through to them.

I initially used to try speaking in a different language to them.  The first time I encountered a beach trader, I was young and very naive – only 21 so a wee baby really – and on my very first long-haul holiday to Mombasa. The young guy hawking his wares obviously realised I was not African (’twas not difficult, I was pasty white and blonde then), so they approached me and my partner and asked in English if I would like to buy whatever – I think it was a necklace. I replied in French (I had vaguely studied French as part of my college course) to say I did not speak English. He immediately replied in perfect French.  Which threw me.  As I had no idea what he said.  So I tried saying in Spanish that I did not understand him. Dammit if he then didn’t reply back in Spanish. I think if I had tried Japanese he would still have had an answer. Which, to be honest, you have to admire. These guys may not have a University degree nor do they have a well-paid full time job, but they can speak more languages than the majority of tourists to Kenya.

Back to the subject in question, however, as I have digressed slightly.  The reason for the new move to ban the beach traders is that the Kenya tourism ministers ‘want to ensure that tourists enjoy their time outside hotels instead of worrying about beach boys and girls who hassle them or steal from them’.

Now, I must admit, I have never worried that these people would snatch my camera or purse and run off, but I do resent the ‘in your face’ intrusion. And I am aware that I do have a quick temper, so when pushed with something like this, I do have to really control myself and not shout at them to go away.

I find now the best approach is to act completely deaf. If you totally avoid all eye contact, and do not respond at all (and yes, we are all brought up not to ignore people as it is rude, but this does seem to be the only approach that works), they will soon get bored with trying to engage you in a conversation, and wander off to find another tourist who may not be as resolutely stubborn as me.  Even if you say ‘no thank you’ you have engaged them in a conversation – so you are ‘fair game’ for them to try to elicit more words out of you.

Personally, I think that beach traders do have a place still on the Kenyan beaches.  As long as they learn to respect that if they are ignored, to just go away. Sometimes, they may be selling something that people would want as a souvenir, and having bought from someone local and bartered on the price is more of a souvenir and holiday experience than buying it from the hotel curio shop would be!  It is their livelihood too, so by banning them they will either only go and sell somewhere else, or heaven forbid, they may turn to other ways to ‘make’ their income.

Maybe one solution would be for hotels to have licenced operators on their private stretch of beach, and inform their guests that this is the case – which would maybe stop tourists feeling they are being threatened if approached – the traders are just an ‘extension’ to the hotel services. And the traders work to rules, and anyone who breaks these rules is not allowed to trade with the hotel anymore.  I understand that this approach is also being considered as an option by tourism ministers, so fingers crossed this could be the answer. 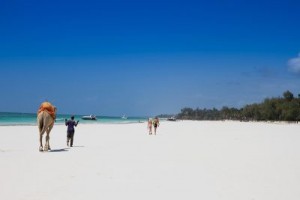 Comments Off on Kenya’s Beach Traders – Good or Bad?