New Wilderness Camp to be Opened in July 2013

Wilderness Safaris have just announced that they will be opening their brand new Wilderness Classic camp – Hoanib Skeleton Coast – in July 2013.  This exclusive camp will have just 8 units (including one family unit) and will be located 90 km south-east of their previous Skeleton Coast Camp site, offering guests the opportunity to still visit this remote area of Namibia.  Daily flights will be into a dedicated new airfield in the vicinity, which has been designed to impact as little as possible on the fragile desert environment.

The new camp is located on the Hoanib River, on a private concession straddling the Palmwag area and Skeleton Coast National Park, in one of the most remote areas of the Kaokoveld.  The Kaokoveld is a land of beautiful rugged scenery, and the historic coastline, mountains, vast plains, and dry riverbeds are inhabited by plant and animal life who are fully adapted to the harsh desert conditions. Despite the arid environs, one of the greatest concentrations of desert elephant and lion can be found within this extraordinary area – along with sightings of giraffe, antelope, black rhino, leopard and cheetah.

Exploring the territory on foot, by vehicle, in hides, and by air, small groups led by expert safari guides can look forward to unravelling the enigmatic history of the original Strandlopers (“Beachcombers”), their stone circles lying in hidden valleys, marvelling at the ancient Welwitschia plant, following herds and other wildlife, and savouring endless coastlines and landscapes unfolding untouched for hundreds of kilometres.

For the first time, forays into the Hoanib floodplains (previously restricted inside the Skeleton Coast National Park) can be undertaken; this includes the strange upwelling of fresh water at a series of oases in the middle of the shifting Namib Desert. Extended journeys will explore the shores of the world-famous Skeleton Coast.

In line with Wilderness Safaris’ commitment to the Government of Namibia’s far-sighted Community-based Natural Resource Management policy – an approach that Wilderness has embraced from the outset – the twenty-year concession is a joint venture with the neighbouring Community-based Conservancies of Anabeb, Torra and Sesfontein.

We look forward to sending the first guests there in a few months time! 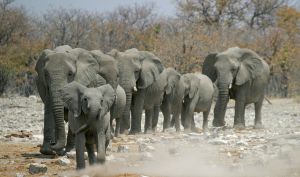