A Mothers Love and Devotion

A few years ago, I was on safari in Sabi Sands, staying at Savanna Private Game Reserve. 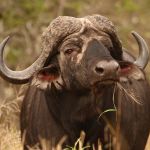 On the way back to the lodge one early evening, we saw a herd of about 40 buffalo, with several young.  2 minutes later, we caught sight of the pride of lions, sitting up in the long grass, with their eyes fixed on the herd.  Downwind of the buffalo, the herd had no idea of the impending danger.

Our ranger took the decision that the lion were not going to make any moves, not until it was completely dark.  We all returned to the lodge for dinner, but immediately after dinner, the offer was put to the guest ‘Who wants to go out again to watch the impending chase and kill?’

I couldn’t understand why it was just myself and my husband who jumped at the chance, I think maybe the phrase ‘kill’ put the other guests off. 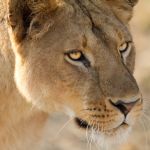 2 Land Rovers set off about 10 pm – myself, my husband Paul and our ranger Andrew in one, and the other ranger Ryan in the other.  We went back to where we had last seen the lion, and true to expectations, they had moved closer to the herd.

We parked up behind the lion pride, watching and waiting, for about an hour.  There were 8 lionesses in total, and they alternated between sitting up alertly, and lying down looking completely uninterested.

Then we had movement.  The buffalo herd became a bit dispersed, and a female and her calf were left slightly isolated from the rest of the herd.  As one, the lion pride started to move, half going around one way, half going around the other.  The calf wobbled on its legs, close to its mother, totally unaware of the danger that was about to erupt.

And erupt it did.  The lionesses moved as one, and within seconds, the mother had fled in one direction, and her calf had been brought down.  I covered my eyes, I know it is nature, but I didn’t want to see it come to its final end.

But then the mother returned.  Head down, she charged at the two lionesses who were holding the calf down with their paws.  They leapt away, and the mother turned and charged at another lion.  Confused, the lions began to scatter, and temporarily forgot the calf.  I was convinced that the calf was actually dead, then we saw it move, and it struggled to its feet.  It had survived its ordeal.

The mother continued to run at every lioness she could see, but just as I began to fear that she also would be pulled down, the cavalry arrived in the form of the remaining herd members.  Suddenly, the plain in front of us was full of buffalo running at lions.  Lions jumped on buffalo backs, buffalos kicked back and lions went flying.  One lion tried to climb up a tree, only to have to leap out of the way of a glancing buffalo horn.  The buffalo were on a mission, to protect their own.

Then it dawned on us … we had 8 lionesses running straight towards US at full pelt, with 40 angry buffalo hot on their heels (or paws).   We had been so enraptured by everything, we completely forgot that we should really be moving too.  Too late … now we were the ones being chased.

I never appreciated just how fast Land Rovers could go in reverse. I don’t know if anyone remembers the old Benny Hill sketches … well, this was very similar.   Land Rover being chased by lions being chased by buffalo.

The next day, we found the buffalo again.  The calf was easy to spot, as it had huge welts down its side from where it had been pulled down, but it seemed to be OK.  How long it did survive for, I don’t know, I like to think that it lived a long and happy life.

Funnily enough, about 5 years later, we bumped into our ranger Andrew, at another lodge.  He looked at us, recognition dawned, and the first thing he said?  ‘Hey, weren’t you the guys that we watched the buffalo lion chase with’?  He admitted that in all his years of being a ranger, this was one of the best nights of his life.  And it was definately one of my all time best safari memories.

Comments Off on A Mothers Love and Devotion