Whale watching is one of the major attractions of the Western Cape, and Hermanus and Gansbaai are the 2 main areas for whale watching, either boat-based or land-based. 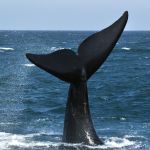 The first Southern Right whale has been spotted in Walker Bay at Hermanus, so this is now officially the start of the whale watching season !

Having been whale watching myself at Hermanus, I would definately recommend including this in your itinerary if you are in this area. I would also recommend actually staying in Hermanus for at least one or 2 nights if time permits, especially if you want to go out on a boat. The boats tend to leave early in the morning, as they go out with first tides, so this would mean a VERY early start from Cape Town (around the 5.30 am time) to ensure you arrive in time – and let’s be honest, unless you are on safari do you really want to get up that early ??

You can read more about whale watching in Hermanus, and check out the hotels and guest houses that we recommend by clicking here.

We also recommend Dyer Island Cruises or Southern Right Charters if you are looking for an operator to go out with.

Comments Off on Whale Watching Season has Officially BEGUN !!