The second episode of ‘Cheetah Kingdom’ will be screened on ITV1 at 8pm this evening. 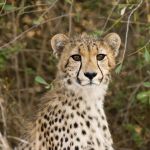 An ITV film crew has spent much of 2010 at Okonjima following the daily work of the AfriCat Foundation. The series provides a glimpse at the conservation work undertaken by the foundation and provides a great overview of life at Okonjima.

The series tracks the largest cheetah release programme attempted in Namibia, a country that is home to roughly a quarter of the world’s cheetah population, where they’re routinely trapped by farmers protecting their land. This episode follows the fortunes of the group of cheetahs being prepared for life in the wild and viewers get to see the next stage of their release as the gates are opened to their new 40,000 acre home.

If you missed the first episode or do not have access to UK TV you can catch up on the ITV Player site.

Comments Off on Cheetah Kingdom – Tonight at 8 pm on ITV1