In the Beginning, the Buffalo used to hunt and eat meat, and was the King of the Bush. All the other animals, including the Lion, feared Buffalo. 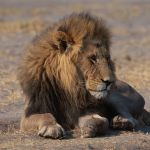 One day, Lion was sleeping under a tree when Buffalo walked past. Buffalo was just about to charge Lion, when Lion awoke and begged for mercy.

“Please do not kill me,” said Lion. “If you save my life, I will forever be indebted to you.”

Buffalo was quite a lazy animal, and he could see a way to use Lion.

“Fine,” said Buffalo. “Every day you must catch me something to eat. Today I would like a tasty young Impala.”

So Lion went off and killed a young Impala, and brought it back to Buffalo, who devoured it hungrily. 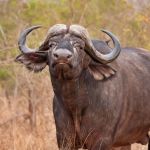 The next day, Buffalo ordered Lion to kill a Zebra. Again, Lion went off and found a Zebra, and watched the Buffalo eat the kill.

Every day, Buffalo ordered Lion to catch something. Soon, Buffalo’s appetite began to grow, and he wanted more and more food, so Lion was kept very busy.

Because Lion was out hunting for Buffalo all day, Lion’s family were growing very hungry and weak. Lion was very worried, and one day asked Buffalo to let him go and hunt for food for his family instead. 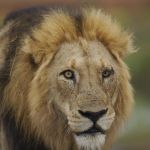 Buffalo was annoyed. “No you cannot,” he replied. “You are indebted to me. Now go off and today I want you to kill one of every animal in the bush for me.”

Lion was angry at the selfish, greedy Buffalo. “If that is your wish, then I will kill one of every animal – but starting with YOU!” Lion killed Buffalo, and his family feasted for days on the fat carcass.

To this day, Buffalo have never eaten meat again, and also live in herds so that they can protect each other from the hungry Lion and his family.

Comments Off on Why Lion Hunt Buffalo