If you book BEFORE 31st July, you can take advantage of 2 special offers currently being offered by Makanyane Safari Lodge, in the malaria-free Madikwe Game Reserve, which boasts 76,000 hectares of Big 5 game viewing territory. As well as elephant, lion, leopard, rhino and buffalo, the reserve is also home to wild dog, cheetah, plains game including gemsbok, springbok, zebra and giraffe, and over 340 species of birds.

Unfortunately, neither offer is valid over the World Cup period (1st June 2010 until end July 2010). 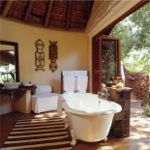 Makanyane Safari Lodge offers you the ultimate luxury safari experience. Each of the 8 luxurious suites has an open fronted lounge and a private sundeck. Glass walled bedrooms and bathrooms offer uninterrupted views of the bush and the Marico River.

The spectacular bathrooms have a freestanding bath as well as indoor and outdoor showers, and the wide, folding doors can be opened to allow the sounds and scents of the surrounding bush to join you while relaxing in the bathtub.

Comments Off on Makanyane Money Savers !