From now until the 19th December (excluding the World Cup period), for anyone wanting to sample the new One&Only Hotel in Cape Town can stay there for 4 nights, and only pay for 3 ! 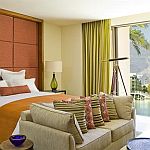 The One&Only Cape Town is an urban chic waterfront resort with captivating views of Table Mountain.

At the heart of One&Only Cape Town, on its own private island in the centre of the waterway, lies an exclusive, unparalleled spa retreat.

The 131 spacious rooms and suites are adorned with fabrics and furnishings recalling the warm, muted tones of Africa’s savannahs, with bright splashes of colour paying tribute to the land’s vibrant personality.

Comments Off on One&Only Special Offer