Our Feedback on Albatross Guest House

We visited this guest house, situated in the quiet suburb of Benoni and just a short, convenient drive from Johannesburg Airport, on 22nd February for a flying visit.

I don’t believe it has been ‘officially’ graded by the TGSCA, but I would say it is definately a 3* standard. 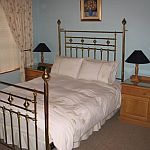 The rooms are clean and comfortable, and are fairly basic in terms of their furnishings, but they are all en-suite – some have just a shower, some have a bath with a shower over – and they all have their own entrance which opens out onto the pleasant garden. If you are on a budget, then they are absolutely ideal – the current published rate until the end of July 2010 (excluding the World Cup period) are just R650 per room per night, including breakfast.

The breakfasts have the choice of cereals, juice and a small fry-up if you want more, served in a large dining area just off the garden, whose only downside is the slightly dated tables / chairs if I must be totally honest.

The owner, Vees, is very friendly, and he would bend over backwards to help anyone out … in fact, I know this for sure as my colleague was ‘stuck’ in Jo’burg in early January as her flight home was grounded due to bad weather here in the UK, and he came out to pick her up, spent time online finding out about the next available flight for her, and also took her back to the airport the next day.

Overall, Albatross Guest House does exactly what it says on the can, so to speak !

Comments Off on Our Feedback on Albatross Guest House