Stay for 5 nights for the price of 4 at Cape Cadogan Boutique Hotel in Cape Town between 1 December 2010 and 31 January 2011 (BUT excluding travel over the Christmas and New Year period between 20th December 2010 until 7th January 2011).

The Cape Cadogan is a stately double-storeyed Georgian and Victorian building that dates back to the beginning of the 19th century, and was declared a national monument in 1984. 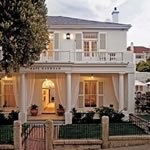 The hotel is situated in the heart of Cape Town, just off the fashionable Kloof Street, so some of Cape Towns’ finest restaurants are a leisurely stroll away, and you are just a short drive from the beaches at Camps Bay, Table Mountain and the V&A Waterfront.

This boutique hotel is well known for its comfortable, luxurious atmosphere. The 12 luxuriously appointed en-suite bedrooms are decorated with an eclectic mix of contemporary and antique furniture using dramatic fabrics to maximum effect.

Comments Off on December Savings in Cape Town !