The Difference between the Reserves of the Eastern Cape

For a lot of visitors to South Africa, a very popular safari destination is to spend a couple of nights in one of the lodges of the Eastern Cape, as this can easily be combined with a visit to Cape Town and a trip along the Garden Route – and the area is also malaria-free, which especially for families is an important consideration

But which lodge or reserve do you select? There are so many to choose from – Shamwari, Kwandwe, Pumba, Amakhala, Lalibela, Kariega … so what are the main differences ?

This may, I hope, shed some light for potential visitors to this area ! 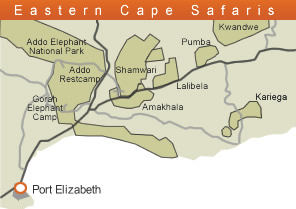 The reserves of the Eastern Cape range in size – anything from 5,000 hectares to 25,000 hectares. They are all privately owned, which means that the rangers have the freedom to drive off-road if there is a particular sighting that they want their guests to get close to – a pride of lions snoozing under a tree, for example !

The reserves all operate independently from each other, and each therefore have their own wildlife stock – the larger reserves such as Shamwari and Kwandwe can obviously sustain more wildlife in terms of actual physical numbers, and can also sustain species such as wild dog, who need an incredibly large home territory to hunt over – but the privilege of this is reflected in the rates.

The smaller reserves such as Amakhala, Lalibela, Pumba and Kariega, which tend to be around the 5,000 – 8,000 hectare size, do have to limit the number of predators – for example, a small reserve can only sustain a few lion, or else they would find their entire buffalo population is wiped out very quickly by hungry lions !

If Shamwari or Kwandwe fall within your budget, then in all honesty a 2 or 3 night safari in one of these lodges would give you a more rounded safari experience by dint purely of the size.

Staying in either of these reserves means you will generally not see the road / reserve perimeter fence line at all during your stay, whereas in the smaller reserves you may well come across the fence line during a game drive – especially in Amakhala, as the lions are kept in a separate 1,000 hectares on one side of the road, so to get between this and the main part of the reserve you do cross under the main N2 road via an underpass – which can detract from the overall feeling of being totally immersed in your bush / safari experience.

However, to be forewarned is to be prepared – we had some wonderful sightings when we stayed at Amakhala, which included a cheetah mum and 3 cubs on an impala kill just a few meters from the N2 – which more than compensated for the highway encounter !

Kariega is also a ‘split’ reserve, with the lions and elephants being kept separate in one part of the reserve, but you don’t go near the N2 at all – however you do cross over a minor road between the 2 parts of the reserve.

Whichever lodge you choose, you will still come away with memories of a wildlife encounter that will last a lifetime.