It isn't until just before you cross the memorable and grand swing bridge steps that the camp reveals itself. Once across the river, and under the cool shade of the trees, there is a lovely open grass area leading to the main area, which consists of 3 octagonal tents, connected by wood decking and raised above the savannah. Each of the 2 guest lounges here is furnished with comfortable sofas and chairs for a bit of relaxation, and the small library provides resource materials and relative literature.

Rarely a night passes without lion roaring nearby, while leopard are regularly found to wander through the camp and cheetah have established territories on the savannah nearby the main area. The wildebeest migration seasonally congregates outside camp. Open game drive vehicles, small camp size and low tourism vehicle densities make this camp a regional gem. Guests of Mara Plains may also enjoy walking and night drives, 2 sought after experiences on safari.

The camp caters for only 14 guests in 7 uniquely designed octagonal canvas rooms. Each is raised on decks, and opens on 3 sides to the outside. The rooms have a dressing area as well as private verandahs with seating and exquisite views. The en-suite facilities consist of a double basin vanity, flush toilet and shower.

Looking Out from Your Suite

Evening Around the Fire

Safari of a Bygone Era

Sunset Over the Mara

Giraffe on the Plains

Wildlife on the Plains

Very easy to book through Travel Butlers, and excellent communication and fast response. Mara Plains Camp was better than what we expected, thoroughly enjoyed our stay. The room and the camp was luxurious and clean. The staff were very friendly, happy to help and accomModate around our timings.

All rooms have a private verandah.

Mara Plains Camp is primarily accessed by scheduled aircraft transfers to the nearby Olare Motorogi airstrip, from Nairobi's Wilson domestic airport and other locations in Kenya,andnbsp;or private charters. On arrival at the airfield, the transfer to camp is approximately 30 minutes allowing time for game viewing en route.

Mara Plains Camp has been constructed without using any cement in an effort to minimise its impact on the sensitive environment that surrounds it. This makes it entirely possible to remove the camp without it leaving any trace.

All of the structures in the camp are on raised decks, limiting covered surface area and pioneering and innovative green building techniques were used in keeping with their philosophy of leading the way in low-impact safari operations. Solar energy is used throughout the camp and water is bottled locally at the Loita Spring, filtered and 100% chemical-free.

The Olare Motorogi Conservancy is leased from the local Maasai community and conservation fees directly support more than 1,000 families andndash; a partnership which ensures the survival of an astounding volume and variety of wildlife.

Game drives typically start at sunrise, returning for lunch and depart again in the mid-afternoon before returning just after sunset. However, very often guests will go out all day, deep into the Reserve or Conservancy with a packed breakfast and lunch. Very often, safaris will continue into the night, a possibility because of the camp's location on a private conservancy.andnbsp; Night drives are particularly prolific in the Olare Motorogi Conservancy, and while they take patience, sightings commonly include lesser known nocturnal mammals and even lion and hyena hunts.

Hot air ballooning is available, but should be booked in advance and is subject to availability and additional cost.andnbsp; Departures are very early in the morning to allow time to transfer to the nearest launching point.

If a chance to learn about the Maasai is of interest, then cultural visits to a nearby Maasai village (locally known as an 'enkang') are also a highlight. Locally produced crafts are available for purchase at the camp, all proceeds of which go toward the community, and particularly the women's groups and schools.

These are the top properties booked by people who considered staying at Mara Plains Camp, but for one reason or another booked a different property. It may have been that Mara Plains Camp was not available on the nights they wanted to stay, or they decided that somewhere else was better suited to their budget or itinerary.

If you're not sure which place might be best for your own trip then either give us a call or get in touch via the website, and we'd be delighted to run through the options with you. 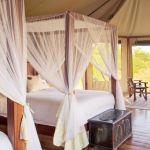 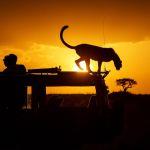 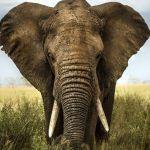 Each of the 12 safari tents has a generously arranged seating area, and a wrap-around deck verandah. While promising every luxury, each tent also deliveres the authentic feel of an under-canvas safari experience - complete with the nightly whooping of the hyenas and the distant roars of the resident pride of lions. 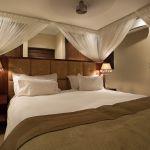 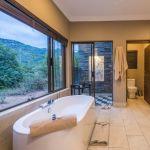 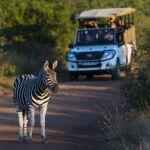 Shepherd's Tree Game Lodge is set on a private concession within the malaria-free Pilanesberg National Park. Guests here can enjoy exclusive drives on the concession as well as being able to drive on all the Park's public roads. 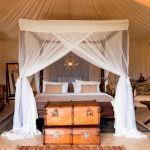 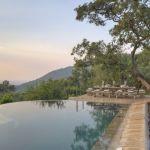 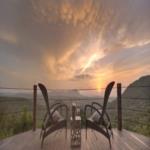 The camp has 9 authentic white canvas tents, which are spacious and luxuriously furnished, incorporating original safari antiques. As the concession is outside the main Masai Mara Reserve, guided walks and night drives are allowed on the concession and are highly recommended. 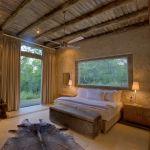 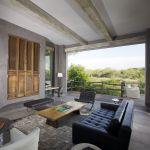 There are 12 villas at Kapama Karula, each enjoying their own exquisitely decorated and generous private space. The big glass sliding doors that wraps around the suites, offers the opportunity to have unrestricted views over the Klaserie River and all its wildlife. 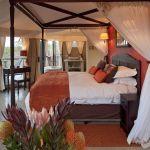 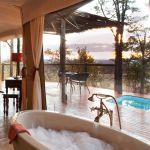 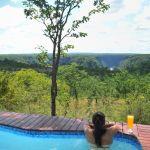 The Elephant Camp is a luxurious and intimate lodge situated on a private concession and bounded by the Masuwe River and the Zambezi gorges.  The Camp offers exclusive suite accommodation for 24 guests in 12 luxury tented suites, each boasting a private plunge pool and viewing deck.