The incredibly isolated and therefore seldom-visited and unspoilt Katavi National Park is actually a safari enthusiasts dream destination - fantastic animal and birdlife, beautiful scenery - and nobody else for miles around!

Covering a massive 4,471 km², a safari in Katavi is only accessible by light aircraft, due to the distance (it is about a 4 hour flight from Arusha), and is often combined with a fly-in safari to the Mahale Mountains National Park, as these 2 remote Parks contrast well with each other and make up what is commonly referred to as Tanzania's Western Safari Circuit. 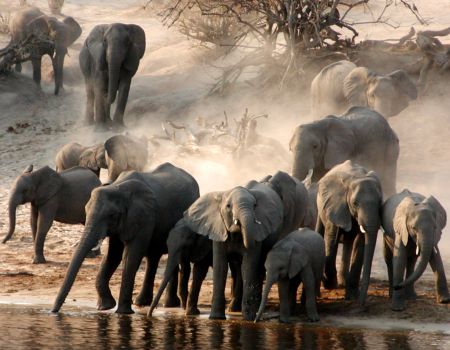 The main draw for game viewing is around the Katuma River and the seasonal, marshy Katavi and Chada Lakes, and the surrounding flat, grassy valley floor floodplains. During the rainy season (November to April), the Park is truly stunning - enormous swamps, flowing rivers and waterfalls, shimmering lakes and lush, green grasslands.  A myriad of waterbirds can be spotted, as well as hippo and crocodile wallowing in the waters.

However, during the dry season (May to October), the lakes, waterfalls and swamps dry up, and the Katuma River is the only drinking water source for the wildlife. The river, now a mere muddy trickle, and its surrounding floodplains have to support the immense concentrations of game that reside in the Park. Huge herds of buffalo and elephant descend on the area, closely followed by zebra, giraffe, impala, eland, sable and roan antelope, and reedbuck - who are followed closer still by hungry predators such as lion and spotted hyena. Hippos gather together in shallow pools of water - and can number up to 200 individuals in any one spot.

A safari in Katavi is ideally suited for experienced safari goers looking for a new and adventurous wildlife experience, and is not really recommended for families with young children.

Mbali Mbali Katavi offers an exciting bush experience, and is ideal for the traveller looking for a truly remote experience away from regular tourist routes. Game viewing is exceptionally rewarding due to the sheer abundance of wildlife here.

Chada Katavi is stylish and wonderfully comfortable. The 6 canvas tents are raised up on wooden platforms and have wide-open fronts to let in the passing breeze. The en-suite bathrooms have traditional outdoor safari style bucket showers.

Children over the age of 12 are welcome.