You can find a wide selection of current special offers here.

Book 3 nights at Lion Sands River Lodge in the Sabi Sand Reserve and receive 3 nights FREE in Cape Town - either at the Cape Cadogan Hotel OR in a Luxury Apartment at More Quarters Apartments. 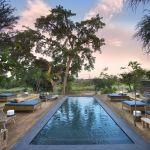 Lion Sands River Lodge, in the southern portion of the 65,000 hectare Sabi Sand Game Reserve, is built on the banks of the Sabie River.

Game viewing in search of Africa's Big 5 - lion, leopard, elephant, rhino and buffalo - are conducted in open Land Rovers every morning and afternoon.

The 18 luxurious thatched bedrooms all have en-suite bathrooms, outdoor and inside showers and a wooden viewing deck.

The climate is Mediterranean, with mild winters and hot summers.

Consistently voted amongst the top cities in the world to visit, it is no surprise that this wonderful city is one of the highlights of a holiday to South Africa, and most people want to return again and again.

The Cape Cadogan is a stately double-storeyed Georgian and Victorian building that dates back to the beginning of the 19th century, and was declared a national monument in 1984. The luxuriously appointed en-suite bedrooms are decorated with an eclectic mix of contemporary and antique furniture using dramatic fabrics to maximum effect.

The More Quarters Apartments are conveniently located just off fashionable Kloof Street, with some of Cape Towns’ finest restaurants just a leisurely stroll away.