The capital city of Windhoek

The capital of Namibia, Windhoek, is a pleasant city set at an altitude of just over 1,600m amongst rolling hills right in the centre of the country. The climate is generally a little cooler than in most of the interior of Namibia, and outside of the January to March rainy season, clear blue skies and 10 hours of daily sunshine are the norm. With a population of around 240,000, it is relatively small, but is still the largest city in Namibia - and also one of the most relaxed and cleanest cities on the whole continent.

There are several interesting things to do in and around Windhoek, however most visitors will only spend a couple of days in the city before moving on to Etosha, Sossusvlei or Swakopmund.  Windhoek is a very compact town, and all of the main places of interest in the town centre can be easily reached on foot.

The Alte Fest, or Old Fort, is the oldest surviving building in Windhoek, and is set in a commanding position overlooking the city. Its whitewashed walls now house the National Museum of Namibia, which covers the history of Namibia from its early occupation by the San, through its colonisation by Germany, the discovery of diamonds, rule from South Africa, and finally independence. It is an interesting story well told, and there is the added attraction of a very good restaurant next door which serves traditional foods, including omaungu caterpillars which are a Namibian favourite...try them stir-fried with chillies, onions and soy sauce for an unforgettable starter. 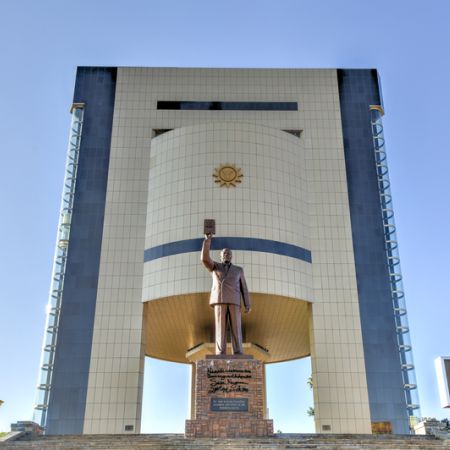 Almost next door to the Alte Fest, the Christuskirche now sits in the middle of a traffic island overlooking the town.   Its almost fairytale-like appearance makes it one of Windhoek's most photographed buildings. Built between 1907 and 1910 by the Germans, inside there are several plaques remembering the German soldiers who died during the many wars in the country.

This museum tells the story of Namibia's history, and was inaugurated on March 21 2014, the 24th anniversary of independence of the country, by President Hifikepunye Pohamba. The design of the building is unusual, and the glass fronted elevator is an attraction in its own right, affording great views over the city on the way up or down. There are 2 statues in front of the museum - the Genocide Memorial statue (in memory of those who suffered during the 1904-07 war) and the Sam Nujoma statue (representing the country's modern day story of the national liberation struggle).

The tintenpalast And state house

Now the Parliament building, the Tintenpalast (literally meaning 'palace of ink'), is set in large, peaceful gardens overlooking the city. Built in 1913, the name came about because Government officials were known for using a lot of ink! Situated near the Christuskirche and the Tintenpalast, the State House is the official residence of the Namibian president. However, it is closely guarded and it is not possible to get near the entrance.

Mounted on steel columns and adding special interest to the Mall is the Gibeon Meteorite Fountain, where 31 of the original 77 Gibeon meteorites are displayed. The Gibeon meteorite shower occurred south-east of Gibeon in southern Namibia, and is the largest known shower of its kind in the world.

Situated on the hillside with a splendid view over the city, the terrace at Heinitzburg Castle is a popular venue to enjoy a sundowner. Originally commissioned in 1914 by Count von Schwerin for his fiance, Margarethe von Heinitz, this elegant castle is now a Relais & Chateaux hotel, and combines 19th century charm with some of the finest cuisine in Windhoek at 'Leo's at the Castle' restaurant.

A favourite with locals and tourist alike - the unique Joe's Beer House, on Nelson Mandela Avenue. This wonderful pub and restaurant is always busy, and has a great atmosphere!  Open for lunches and dinners, the generous meals (specialising in Namibian and German style food) will make sure you don't go hungry for a very long time!

Only a 25 km drive from Windhoek is the Daan Viljoen Game Park, a peaceful 4,000 hectare reserve set amid beautiful rolling hills. Named after a former South African administrator to South West Africa, the Park was declared a National Park in 1962 and is home to a wide variety of wildlife, including blue wildebeest, zebra, kudu, baboons, oryx, eland and springbok. There are also over 200 species of birdlife. There is a loop road which you can self-drive around, with several viewing points overlooking the surrounding countryside and mountains. However, as this is not a Big 5 game reserve, visitors are able to explore the reserve on foot, and there are 3 good hiking trails which can be followed.

This intimate boutique hotel in a tranquil corner of Windhoek embodies the very essence of chic comfort. There are just 7 suites in total, and each suite is individually decorated, reflecting a different region in Namibia.