We have just revamped the Garden Route section on our website, to hopefully make it more ‘user friendly’.

We now include more general information about what there is to see and do, including a comprehensive guide to family fun, golf courses and beaches, as well as the ability to search on accommodation in the major towns (Knysna, Plett, Wilderness, Tsitsikamma).

We have also included a short section on the scenic Route 62, which is the alternative way of driving to / from Cape Town to this popular tourist destination.

It has been announced yesterday that Nationwide Airlines are able to issue airline tickets again.

Long-haul flights between Johannesburg and London-Gatwick have now resumed and limited domestic flights have started again from last Sunday. 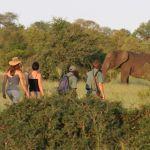 We have recently updated the information for the Rhino Walking Safaris concession in the southern part of the Kruger Park (access via Paul Kruger Gate).

The lodges are both in a very game rich part of the park, and most guests choose to split their stay between the two camps as this gives the best mixture of game drives from Rhino Post Camp (where you will get to see more of the reserve and have the chance to get closer to preditors which cannot be approched on foot) and walking safaris from Rhino Plains Camp (tracking Rhinos on foot is an unforgettable experience).

Comments Off on Rhino Walking Safaris In Kruger 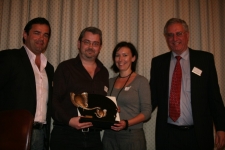 The 120+ guests from the travel industry were treated to many fascinating speakers including Virginia McKenna (founder of the Born Free Foundation), Will Carling (the former England Rugby captain speaking about his recent family safari in South Africa), and Adrian Gardiner (founder of the Shamwari Reserve and Chairman of the Mantis Collection).

The evening was a huge success, and given the prestigious location and illustrious speakers, Tracey & Paul were particularly honoured to receive The Adrian Gardiner Award For Innovation on behalf of Travel Butlers

We have updated our weather and climate pages for South Africa and Namibia to include 3 day weather forecasts for key desinations. The forecasts come from the BBC and can be seen by following the links below:

Please note that the availability of forecasts for Namibia is fairly limited, and they all tend to be concentrated in the south of the country and coastal regions (there are no forecasts available for Etosha, Sossusvlei, or the Caprivi Strip).